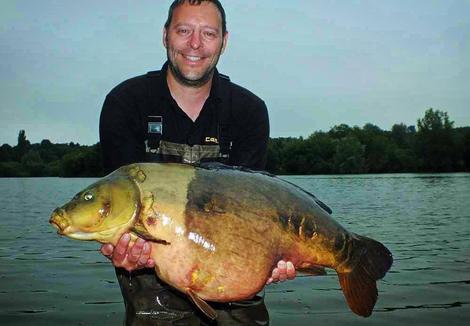 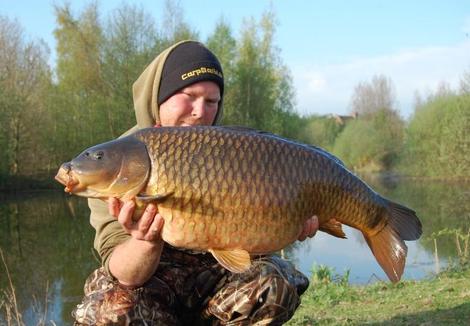 Dean Vaughn with the first reported 30lb common from Lodge

Lodge is the largest lake on the complex and is the former holder of the British record for Bream, an incredible fish of 18lb 15oz caught by Kerry Walker. Lodge is a most beautiful and under fished lake of just under thirty acres and is made up a main body of water and several bays including the 'house bay' (bottom left of picture) the 'Bistock bay' (middle/top left) the 'River bay' and the tiny and intimate 'keyhole bay' (bottom right of picture) plus three large islands and a huge array of plateau's, bars, silt and gravel areas and plenty of lovely weed. Like all the lakes Lodge is incredibly rich and has produced specimen sized fish of all species and incredible growth rates in stocked fish. As an example a pair of carp stocked in 2008 at 12 and 14 pounds were caught as a brace by Patrick Billman at 29.14 and 35 pounds in 2012! Sadly the lake record carp of over 42lb's is no longer with us (another victim of those '07 floods) but many other fish are gaining weight rapidly in the rich enviroment and it really is only a matter of when, not if, Lodge produces its next 'forty' in fact, new 2013 member Dan Millard recently caught the magnificent 'three scales' at a weight of 38.08 and that was after the fish had spawned! 2013 has also seen the lakes first 30lb common which was caught in a brace of thirties to local angler Dean Vaughn who's after half of the brace was 'mini mallins' at 32lb. Other big carp of note include 'blues fish' (mid thirty) 'the river bay lin' (simply stunning upper twenty) 'Single' (mid thirty) 'Crinkle tail common' and 'Cluster' (both upper twenty, fast heading for thirty) to name but a few. Lodge also has the potential to throw up a suprise or two, I have seen with my own eyes a common (swimming with another known mid thirty) that was easily a mid thirty and quite possibly bigger, this fish has never been reported as caught. There are also reports of one or two other large fish that have not seen a net in recent years but this is probably more to do with the lack of substained angling pressure as anything else. Recent stockings include a total of forty Dinton strain carp, and at least fourteen of our own home grown fish transported from Works lake in 2008. The Dinton fish are steady rather than fast growing fish but they do gain weight every year and quite frankly every one is a stunner with some incredible heavily scaled mirrors that will form the future of this lake. The Dinton stockings were made as follows, 2009 fifteen double figure commons, 2010 fifteen double figure mirrors, 2012 ten mirrors from high single to low doubles. Many of these fish are now well into the twenties and, as with Bawburgh, stock fencing has been erected in areas at risk from flooding.

Lodge also holds a very healthy stock of Tench, again large hauls of fish are common with a high average weight and several fish well into double figures. When the angler gets it right the Tench sport can be hectic, I once witnessed well know Bawburgh specimen hunter Darryn Stolworthy unable to keep two rods in the water such was the ferocity of the action on maggot feeder. There is also a very small head of Bream still living on Lodge, as far as I am aware none have been caught in recent years and no one specifically targets them on this lake but regular sightings confirm that a small handfull are still present.

Like Bawburgh, the Lodge pike are making something of a come back after a dip in size and numbers in recent years. Several good fish have been reported in the last couple of years and a good head of young pike can be seen prowling the margins on a warm day giving hope that Lodge can once again make a return to its legendary heydays. Again, as with Bawburgh, a strong head of silver fish are present and can be relied upon to provide an excellent food source for this future generation of predators. 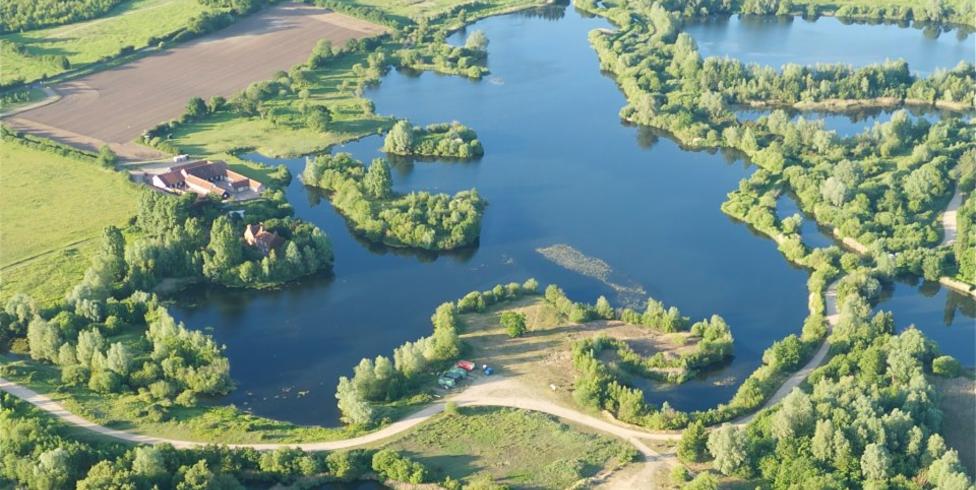